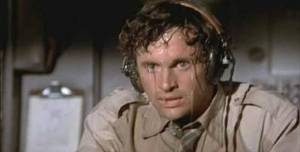 It’s now May and finally the thermometers have started to climb above five degrees, where they have resided all winter and early spring. Now, I am generally hot. Our office is stuffy and centrally heated and all winter long, the battle lines were drawn between those who like it toasty and actually, just me. We’ve had a load of removals and arrivals recently and I seem to be the only one left who overheats on a daily basis. The bad news is that one of them was a friend, who I miss dearly. The good news is that he had the coveted seat next to the window, so I jumped into his spot faster than a toupee flying in a hurricane. Nowadays even the diehard chilly types don’t mind a cooling spring breeze.

Every morning this year, I’ve walked through the door to a wall of heat and the first thing I’ve had to do is turn the heating down. Not off completely, for I am not insensitive to their needs, just down a bit. This was often greeted by moans from my colleagues and a spot of teasing. What they failed to understand is that they can heat up. They could wear a cardigan or jumper for example, which is not too complicated or unpleasant. I, however, cannot cool down without being arrested for indecent exposure. I am only wearing thin layers as it is. Sometimes I have used a fan, but the only one we have is rather large and this provides too much cool air for my neighbours, so I feel pressured to turn it off. Grrrr. Did I mention that I am hot?

The worst of it is that I am not just a little bit pink and uncomfortable, I am often full on sweaty. I’ve been this way for a while and it only seems to be getting worse. I have not needed much in the way of woollen clothing all winter. Yes, it’s been cold outside, but as soon as I hop on a busy morning commuter train, I start getting all hot and bothered and I look like I’ve just stepped out of a sauna by the time I’ve walked to the office. It’s not helped by having a very fast walking speed. I have tried to slow down and take it easy, but my natural pace kicks in and I end up speeding up again.

On the train, I try to act like a normal person and dab my soggy face discreetly with a tissue. I take comfort in knowing I am not the only one, as I have seen other women doing the same. Rain is a blessing, as it disguises this shameful act. Because it is shameful in some ways; we women are not supposed to be so messy. Remember that rhyme from childhood? Horses sweat, men perspire, ladies glow. Well if that’s the case, I’m glowing like a rock in a volcano baby.

When you think of an image of a sweaty woman, you might think along the lines of something like this:

I refuse to believe that this is real sweat on this chick. I suspect she has been lathered in baby oil, then lightly sprayed with body mist to look sexy. Real sweat is much more embarrassing and looks more like this (disclaimer, these are not my actual armpits): 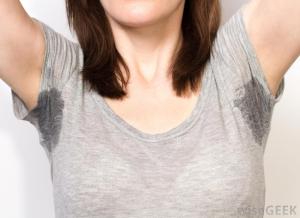 In my case, it tends to gather in socially unacceptable places e.g. my underarms, my face and my back. I don’t have sweaty feet and my palms are generally dry unless it’s REALLY hot. When the summer kicks in, I do tend to get soggy in other uncomfortable places, but the less said about that the better. Unfortunately I suspect that some of this is to do with my age. I looked up symptoms of the perimenopause on the internet and of a long list, I had about half of them. Damn you google! It seems that these can occur up to ten years before periods actually stop, so it can only get worse and with none of the benefits. Don’t be surprised if you see me walking about with a portable fan over the next few years and if you do, keep schtum. Unless you want a feminist lecture about the lack of sympathy in society towards women’s natural bodily processes. 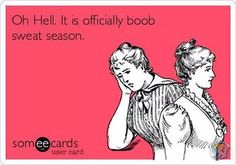 Despite all this, I like the summer, love the sunshine and even enjoy the warmer days. It just means that there are clothes I can’t wear unless I want to look like I’ve just stepped out of the shower and dressed without towelling off. Sigh. And there are times when I have no shame about being sweaty. You can probably guess what number one is. Number two is when I’m doing exercise.

There are women who go to the gym and look exactly the same at the end of their workout as they did at the start. Hair in place, make up still on, not a bead of sweat. No doubt the menfolk think they look great, but in my opinion, they have wasted their time. If you’re not looking hot and bothered after a run or an aerobics class, have you actually got any of the benefits? I think not. Maybe I look like I’m about to expire but at least you can tell I’ve worked my ass off. Fuck it, it’s the only time sweatmeisters like me get to feel superior to the dainty feminine types.

There is a dangerous side to this problem. I have to chalk up my hands for prolonged kettlebell use, for fear of it slithering out of my hands mid-flight and whacking someone on the head. No-one wants to go to jail for the sake of an exercise class. And people take excessive sweating as a sign of nervousness or think that you are lying. No-one trusts a sweaty politician or car salesman. Unfortunately for some of us, we are none of those things, just hormonal.

On a side note, at lunchtime today, I went over to the gym to lift some proper weights, something I haven’t done in for a while. Christ, I have missed it, even though I know I will be aching tomorrow. I’ve had a pink flush all afternoon and I feel good. Women readers, if you have never tried it, I urge you to. I’m not talking about messing about with machines that do some of the work for you, I’m talking about picking up a barbell and doing some of the Olympic lifts: back squat, deadlift, strict press and cleans. You need someone to show you the correct form, but once you have it, you can go by yourself, anytime in any gym. It’s an incredible feeling that you don’t get from other workouts. Power, strength, accuracy…what a buzz. Grrrrr. When you get into the zone of lifting heavy stuff, you feel that you’ve worked out all over and you can take on the world. It’s also a great complement to whatever other training you are doing. It’s all about the legs and core and what runner or yogi doesn’t need that improved?

I am not a huge fan of these #thisgirllifts type slogans, because I’m no girl, nor would I wish to be. But I get it. There’s something immensely satisfying about sweating and grunting over a heavy lift whilst the pretty boys fanny about with the leg press. You won’t look pretty while you’re doing it, but who cares? You will surprise yourself, that I can guarantee. Women are used to picking up heavy things like children and bags of shopping; you will be stronger than you think. Maybe we need a new slogan to get us all in there: #middleagedsweatywomenlift.