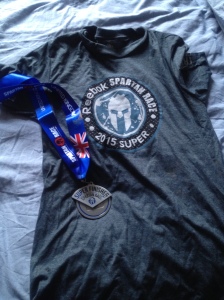 ‘I got a mouth full of dirt

A hand full of charms’…

Yesterday I had everything full of dirt, mud and probably a few insects as well. The Spartan race was longer and much tougher than I expected, but the good bit is that I am officially now a Queen of Sparta. Today I got my time: five hours and 37 minutes of hard slog. Not exactly a time to show off about, but the fact that I stuck it out until the end and didn’t quit gives me warrior status.

I knew from the reports of the Sprint race on the Saturday that the course was likely to be hilly, but I think if I’d known how many hills there were, I would have bottled it. The course was described as 13 kilometres plus, but it was actually nearly 16k, which isn’t a kick in the arse off ten miles. We were constantly walking up or down hills – both kill your legs in different ways. For me it was impossible to run: I’m too unfit to run uphill and I’m too scared to run down them as it’s so slippery. Full respect and awe for the people who actually ran it. If you think I’m exaggerating then check out this graph of the route from one of the participant’s electronic gizmos:

Hill walking is hard but enjoyable because you take your time, and stop regularly for a coffee or a picnic. You wear proper, waterproof boots on your feet that help you grip, NOT slippery trainers.   When checking the route, you avoid all the routes that look like they’re full of bogs. The organisers of this course clearly went out of their way to find the boggiest, muddiest, slimiest routes possible.   The hills were alive with the sound of squelching. And squealing, as we plunged our legs into pools of unknown depth, often up to our knees. I fell on my arse several times and found that on most of the descents, the safest thing was to sit in the mud and just slide down.

What can I say about the mud? I have never been so muddy in my entire life, even including one of the rainy years at Glastonbury. I think the mud was used as a form of mental torture. One of the worst sections was a long, slow, steep hill climb on what was essentially a mud bank. Cursing my way up that hill helped a lot. Another of the obstacles close to the finish, was a set of three mud pools. You had to slide down the bank and get into muddy water up to your chest, wade across a ten foot pool, then clamber up and go down into the next one. Over the course, I think we were in and out of waist or chest high water about ten times.

This included island hopping in the reservoir. There were two small islands. To get to the first one, you had to wade across waist high water. To get the second, you had to wade out and then swim for at least half a dozen strokes. Swimming in dark, freezing water wearing clothes, gloves and muddy trainers is so much harder than it is in the sea or a pool. I managed that, but when it came to the last, much longer, swim back to land, my strength failed me and I had to hold onto the back of a canoe and kick my way along. This was the way to get non-swimmers across, including one of my team who braved what must have been terrifying for her.

And what of the obstacles? I surprised myself by completing most of them. The monkey bars and rope climb were a no-no as suspected, so that was my first 60 burpees. I managed the eight foot walls after getting a foot up from my team mate. The mud crawls under barbed wire were not as much fun as I imagined, but I did them all the same. The second one was uphill with really low wire, so the only way to complete it was to slither on your belly. At that point I could actually feel the mud squelching in my fanjo, which was not the most pleasant feeling in the world. Mud pack treatments are really for external use only.

I carted rocks, stones and bricks (shouting I LOVE MY BRICK a la Father Jack Hackett). I failed the spear throw and I fell off the climbing wall, but the stewards were only half enforcing burpees by this stage, so I only did another twenty there. There were two bits that nearly broke me. The first was the sandbag carry, which was only a few kilometres from the end. Just when we thought we had no more hills to climb, they made us carry a 20kg sandbag around a circuit that included another wee hill. I must have stopped about four times on that route because I’d just had enough by then; I didn’t think I had anything left in me. Coming down that hill with the sandbag was the first time I cried, even after all the hill walking torture that had gone before.

The other bit was just before the end. We could see the tents and hear the music from the finish field, feeling how close we were. But instead of going straight there, the route went via yet another muddy, slippery stream which was covered by low hanging, scratchy branches. By this time, I was full of anger. I cursed and wept my way through that stream, sliding about, trees whipping at my arms. I raged at the Spartan organisers (were they just sadists trying to torture us?), at myself (for being so unfit and slow) and against the world in general. It was that rage that got me stomping to the finish line.

Did I enjoy it? In parts. Sometimes it was so horrible it was funny, and I laughed a lot. The whole team split into chunks, and the two I ran with were a brilliant support. The scenery was beautiful when we took time to enjoy it, and we lucked out as it stayed dry until the last 15 minutes or so: in the rain it would have been utterly miserable.  The ridiculousness of what I was doing struck me so many times: it was a Sunday afternoon and I was soaking wet, covered in mud and pulling a fucking brick up a hill. Not only that, I paid for the experience. Why? WHY?

They say you’ll know at the finish line. What I know is that I was bloody relieved that it was over. My time was not remotely ninja like, but I am proud of the fact that I stuck it out at all; many would not. I did feel like baling a couple of times, but I am just too stubborn. From what I hear, some obstacle courses are about fun and testing your athleticism and strength. This was about that too, but I think it was mainly about testing how you endure under tortuous conditions.

On that assessment I passed, but I don’t think it’s something I would put myself through again. If you want to test your mettle, then it might be worth a shot. That is, if I haven’t put you off!   I smiled at the end because it was done, after being much worse than I anticipated, which always gives you a shot of adrenaline. We raised over a thousand pounds for charity and I got loads of support from friends – thank you all for that. I also got this wonderful card from my son when I got home, which made me feel pretty damn good:

Best of all, I now have the inner knowledge that many tough things are going to feel like a canter after this. Maybe that’s the most important thing you know at the finish. So what next for Queen Leda? There will always be things to discuss, share and rant about, so I’ll keep posting. Maybe I’ll even find a new adventure.