Perhaps there’s a post-Spartan comedown going on, but there have been several occasions this last week that have led me to stick my head in my hands and ponder ‘what the fuck is wrong with this world of ours?’

Many of them right now are connected to politics, media and the ongoing, depressing struggle to find a heart and soul in the people that govern us. Somewhere at the heart of this struggle is our attitude to money, greed and our perception of ‘society’. I’m not going to pretend that I have anything other than an intelligent outsider’s understanding of economics. My view are not based on an academic knowledge of how financial systems work. But what I do understand is how people live, and how we are influenced by the media and the insane pressure of consumerism in 21st century western society. And as a human and a mother, it is really starting to get to me.

Take last Saturday. An invite to a kid’s birthday party. Everyone in the nursery was invited, including the staff and bless ‘em, some of them even turned up. If my job involved looking after children all day, the last thing I would be doing on my time off would be hanging out in a hall full of sugar infested kids.

The parents had hired a hall, a children’s entertainer, a face painter and three machines: for slushies, popcorn and candy floss. They had paid for four grown men to turn up for an hour dressed as superheroes, doing nothing else than dance about in costumes. They ordered happy meals for every kid and, alongside the now obligatory party bags, there were individually boxed cupcakes with iced superhero logos on the top.

Naturally, the kids had a great time. Chatting amongst the more likeminded parents that I am friendly with, our estimation was that the party must have cost them about 600 quid. Perhaps they were rich, but they didn’t seem conspicuously so. I wondered if they had the spare cash for the party or if they had gone into debt over it. This party almost certainly cost more than the house I have booked for a week’s holiday up north in August. The freakiest thing for me was their wee boy was only turning four years old. How the hell do you top that year after year?

It made me think about that quote by Tyler Durden from Fight Club: 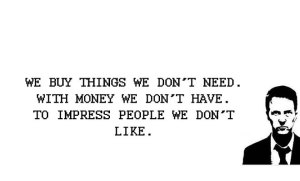 Okay, so the parents don’t know me so I don’t imagine they hate me, although they might if they read this. They seemed nice, but in my opinion, they are completely misguided. Starting this sort of over the top gesturing with young children is not a good idea.   Yes, they might be able to afford it and it must be wonderful in that moment of making all your kid’s dreams come true, but it’s not reality. It can only lead to spoilt kids and self-entitled adults.

All the nursery kids wanted to go to the party, not necessarily because they were pals with the boy but because they wanted to enjoy all the wonderful stuff that was happening at the party. For parents this is a tough call – whether you stick to your principles or risk alienating your child by being the only one who doesn’t get to join in. It can only get worse as they go to school. I know for a fact I will not be able to afford to spend hundreds of pounds on parties and invite the whole class. I certainly won’t be renting him a tux or hiring a limo for his primary seven ‘prom’ as seems to be the norm these days. No doubt I sound like an old git, but when I was young we had a leavers party in school then went to high school without obsessing over transitions. These things were a fact of life and we didn’t need to ritualise everything.

Or perhaps we did mark it in some small way, we just didn’t spend tons of cash getting ballgowns and professional hairdos and all the stuff that happens now. Which is essentially about spending money, as much as it is about marking the experience. So much in our culture now seems to be about conspicuous consumption. It doesn’t just start in school now. Following the lead of pointless and self-obsessed ‘celebrities’ such as the Kardashians and their offspring, people spend a fortune on turning their babies into miniature style icons, all the better to reflect their own status. Look at these pictures from my otherwise lovely La Redoute catalogue. This rhetoric was another thing that depressed me this week:

At the end of the day, baby sick or grass stains are the same whether they’re on a £5 dress from Tesco or a designer frock, right Kim?

While it’s great for people with loads of dosh to find new ways to scatter their cash, for the majority of people, it’s a struggle. They don’t have hundreds of pounds to spend on their kids for parties or clothes and if they’re stressed about money, the last thing they need is having to explain to their kid why their birthday party isn’t as good as wee Johnny’s, or they can’t get all the things that they do. Sometimes they are getting into debt just to try and keep up. I won’t do that.

I am by no means poor but I do need to be better with money now and aside from that, I don’t believe in spending this sort of money on children. My son grows so quickly, it would be a waste to spend more than a fiver on a pair of supermarket jeans. Apart from that, they don’t need hundreds of pounds spent on a party and they certainly don’t need thirty friends to have a good time. They are generally happy at that age with a few pizzas, sausage rolls and party games like pass the parcel. Perhaps I will lead my son into a lifetime of financial trauma, but I am just honest and tell him when things cost too much money. He needs to learn the value of things and not expect to get everything he wants.

Adults, including myself, are not immune to this, but I think there is a growing trend of people who have had their fill of the marketing con. I love clothes but I spent most of my late twenties and early thirties getting into debt buying things I didn’t actually need. Not designer stuff because I couldn’t afford it, but just more things so I could have a variety of things to wear. Even now, I struggle not to have a browse and a little shop every month when I get paid, but I am fighting it.

I’ve stopped buying women’s magazines, which are essentially 300 pages of adverts and articles to explain why you should feel insecure about yourself compared to a stick thin rich person, why you need to buy a £500 throw and why you need to spend hundreds of pounds on serums and moisturisers. It’s all bollocks; the people who create these magazines have a vested interest in making us feel crap about ourselves so we spend more money, stay in debt and stay miserable. If we’re happy, we don’t need to binge shop, binge eat or do any of the other self-destructive things that only make us feel better on a temporary basis.

One of the good things about getting older is that you need less of this shit to validate yourself. I don’t need lululemon pants for the gym – it all gets covered in sweat and no-one cares what you look like anyway. There are no mirrors to admire yourself in designer workout clothes. When I walk past Mulberry or other posh shops in town, I feel no lust just because it’s expensive. I will always admire a nicely cut, stylish frock but I would be more chuffed if I got it for a tenner in a charity shop. Even more chuffed if I realised I don’t need it and didn’t get it at all.

We are a culture too obsessed with trivialities, ignoring the terrible things going under our noses all the time. In the Guardian today, one of the top five reads was the ongoing Twitter battle between Niki Minaj and Taylor Swift. Really? Who actually gives a fuck? And why do otherwise intelligent people care either?

We have lots of challenging priorities: just living, working, loving and all the other things we do take it out of us on a daily basis. We can’t always be on the frontlines waging war against injustice. But we can remember that the powers that be want us dwelling on irrelevancies, thinking small and most of all, spending, spending, spending. Keeping us in thrall and beholden to their corporations.

If nothing else, we can change that. Yes, we need stuff. But we need a lot less than we think and it’s easy to forget amidst our consumer driven culture. Buy less, do more.