Being of more mature years, I don’t always understand everything to do with IT and social media. Setting up this blog was pushing the envelope of my limited knowledge and I am of the generation where university essays were hand written, something which is unacceptable these days. When I was a student, only wankery show offs would have typed their assignments. Similarly, I no longer know the language of the yoof, which I am quite happy about. It’s pretty undignified for middle aged white women to try and talk like a gang member from the Bronx. But now and again, things come up with such frequency, I am compelled to check the urban dictionary to see what’s what.

NSFW is one, which means not suitable for work, a handy warning indeed. The other one I keep seeing is Yolo, often with a hashtag in front of it. This stands for ‘you only live once’, which in theory could be a positive, life affirming attitude, but seems to be generally used by young folk to justify crazy behaviour, often of a criminal nature. There is a sarky quote from Jack Black, along the lines that yolo is carpe diem for stupid people. Going by much of the evidence under the #yolo tag, he might have a point. It seems many of them indulge in moronic and dangerous antics that ironically, could end their life prematurely.

Carpe diem, or seize the day, has a more positive connotation. It really caught the public imagination after the late eighties film Dead Poet’s Society. What young person could fail to be stirred by Robin William’s passionate speeches to his students, urging them to suck the marrow out of life? In this instance, carpe diem was all about positivity, and making sure you didn’t end up stuck in a mundane life, desperately regretting the choices you were too afraid to make. Although in the case of some of the poetry, the meaning was slightly different. The most famous lines, ‘gather ye rosebuds while ye may’ comes from a poem called ‘to the virgins , to make most of time’ which was essentially a plea for 17th century women to get their kit off. Possibly more of a yolo attitude then. 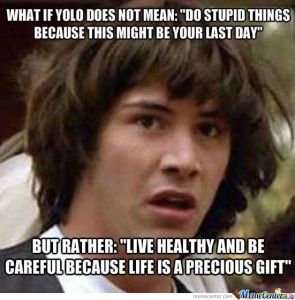 The notion that life is short, we are a long time dead and we’d better make the most of it while we can, does not always lead to good choices. Sometimes it has caused me to spend money that I don’t really have on a pair of shoes that I don’t really need. Or drink one cocktail too many and spend the next day regretting my zest for life. In fact, there’s probably a connection between the cocktails and the shoe shopping. Alcohol often gives the more cautious of us a temporary foray into reckless behaviour. Let’s face it, we’ve all been there.

One or two wines had been certainly been consumed when I agreed to do the Spartan Race. However, I was stone cold sober when I actually paid my money and signed on the dotted line. I had always fancied the idea of doing one of these crazy races, but never had the bollocks to actually go through with it. Booze gave me the nerve to stick my hand up and say ‘I’m in.’

The urge to truly seize the day is not new, however it does seem to me that there are more and more people who are willing to break with convention nowadays, living lives that would have been unthinkable a generation ago. This ‘don’t be afraid, just go for it’ attitude is deservedly popular now. I am glad about this. Most of us live in a culture that is far freer and more permissive than it was for our parents. Despite this, we often need encouragement to break out of our comfort zones. Why are some of us still so afraid to be honest about who we really are and what we want? We make excuses, or say that the time is not right. Deep down, we know that there is never a good time. The time is now. 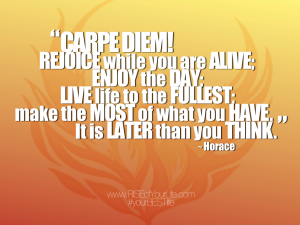 Perhaps it is just human nature to do what’s easy and fit in. Don’t rock the boat. Don’t change.  Don’t fail. I’ve been thinking about this a lot recently, as I try to make changes in my life that are far from easy. I am often afraid of what the future will hold. But what is the point of worrying about that? No-one knows what will happen next. What I do know, is that I have already failed in a lot of ways; failed to be the person that I want to be, or more accurately, failed to do the things that I want to do. The good news is that I have learned from this. I now understand that by feeling that you have fucked up utterly, you liberate yourself from the pressure to keep doing the things that you have done. Because they just didn’t work. Obvious to many no doubt, it is possibly that simple. That learning makes me stronger and more fearless than I have ever been.  That said, it doesn’t make it any easier.  It only gives me more certainty that the path I was on was not the right one.  In other words, something’s gotta give.

Of course, I do not really believe that some kind of new me will be reborn at the end of the race; a Spartan queen arising gloriously from the mud. Quite frankly, I have no intention of doing anything like this ever again, although I do plan to keep up my training and get fitter than I am now.  But the race is a symbol of intention; of the person who CAN do the things she is horribly afraid of yet thinks maybe, just maybe she might just possibly be able to do. And survive with a bit of grace and style.  Even if takes a long time to get there, with a lot of mess and mud along the way.

‘Life is either a daring adventure or nothing at all.’ Helen Keller