Or more accurately, a tall, Polish masseur. I’ve been suffering from a stiff and sore back this last week, on which I blame the dastardly Bring Sally up & Bring Sally down challenge. Suffering so much that I’m ashamed to say I quit. After two weeks, I had got no further than 1:50 and if I am being truly honest, my time was actually starting to go backwards in the last few days. Mainly because I just couldn’t be arsed. My heart was no longer in it and I was having trouble bending. Bye bye Sally, you were just too much of a woman for me. 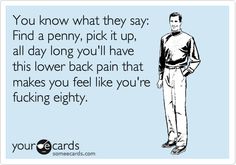 With the source of my problem eliminated, off I went for a massage at lunchtime today. I had hoped that because it was to deal with an overall tightness rather than a specific pain, it would be less agonising than before, even envisioning a bit of enjoyment from the experience. Not a bit of it. It was one of the longest hours of my life. Each time I thought he was done, he moved onto a new area, for new levels of hurtiness. Half way through I just wanted to roll into a little ball, shouting ‘just make it stop’. I swear his fingertips must be made of metal points. It made me think of the scene in From Russia With Love when Rosa Klebb takes over from Robert Shaw’s masseur. He didn’t punch me with a knuckle duster but he might as well have done. 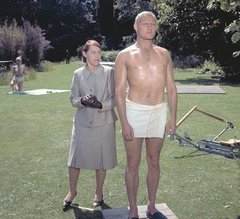 Three good things came of this session: firstly, he confirmed that you should always listen to your body. The stubborn, ‘never say die’ part of me wanted to push through with the Sally challenge, even though deep down I knew it wasn’t helping. I think the problem comes from a lack of upper arm strength, forcing me to take the pressure of push ups onto my middle/lower back and shoulders. This explanation could be bullshit and a way of justifying my quitting, but what the hell, l like it. My body was saying no more push up challenge, so I have listened.

Secondly, I actually feel better and much looser already. I know I need to improve my posture and daily stretching, so I shall just do a good ten minutes of simple yoga stretches every morning for the remainder of my Sally slot and see if that makes a difference. Having a job that is mainly desk based with a crap chair is not good for me, or for any of us. My spine is not happy. When I see how fidgety and active my son is, I wonder how he will manage to sit at a desk all day when he starts school this year. Stapling to a chair may be a necessity. When you think about it, it’s sad that our natural energy and flexibility is gradually knocked out of us as we grow up. We should be learning more from animals in this respect. 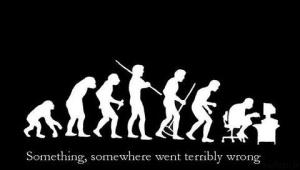 Working on my upper arm strength is a must, both for the Spartan Race and for good back health. We had the Spartan team training session on Sunday and I discovered that while I wasn’t quite the slowest runner, I was the only one who couldn’t do a pull up. Arse biscuits. All is not lost though, as I went for a training session on Wednesday and Coach has got some new equipment, including a mace. Disappointingly, this is just a heavy rod with a ball at one end, not the nasty medieval weapon I had imagined. Which makes sense; the insurance required to allow people to swing these bad boys around would no doubt be a tad on the hefty side. 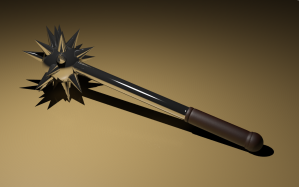 I have been assured that flinging this about in a controlled manner will help with some of the skills I need for the race, so I shall put my inner historian to the side and be content without bloodthirsty war games. I also need to lose a bit of weight; obviously the heavier you are, the harder it is to pull yourself up by the arms. And I do want to shift some pounds as there has been a tightening of the waistband of late; it is better to act now than when I am a stone down. Life promises to be a riot of mace flinging abstemiousness in the near future and I cannot wait.

Thirdly and finally, it allowed me to practice my creative visualisation technique. This is something that has stood me in good stead before but not been practised lately. I have mentioned before the technique of pretending to be running flat when you run up a hill. This didn’t work so well a couple of weeks ago but I wasn’t really trying. When I ran my first 10k, it did. Even though I was slower than a sleepy snail, I ran up a particularly vicious hill without stopping.

Everyone is different, but for me, what worked was not only imagining, but repeating the words over and over in my head: this is not a hill, this is not a hill, this is flat, this is flat. Another mantra that works for me is the voice of my Coach in my head saying quietly ‘you won’t be stopping’. He said that to me at the end of my very first training block, more than eighteen months ago, when I wanted to quit, asking if I could stop. If this all sounds bit Christian Gray, let me assure you it wasn’t. I was on a rowing machine for Christ’s sake, not a gurney. I could have got up and walked away if I’d wanted to. This phrase has come back to me several times on the approach to the hilly bits in the parkrun. And the more you repeat something, the less you are able to think your own thoughts about giving up.

Today, it was more a case of telling myself it was almost over. I didn’t have to do anything physical myself, just lie there and endure, knowing that it was for my own good. Sometimes you have to go through pain to get better. Images helped too. Picturing a peaceful sunny beach from the day before. The foamy bubbles around the edge of that first satisfying cup of coffee of the day. Getting a snoozy, relaxing massage from a gentle lady. At one point, I actually pretended I was about to get a shot of gas and air, which mothers will know does shag all for the pain of childbirth, but is a lovely thing.

The point is, sometimes when we need to, we can get through horrible experiences, including running, by pretending we are not there, or by focusing on happier things. It’s not the ideal way to live your life but it can get you through an hour or two of pain. As Julie would say, raindrops on roses and whiskers on kittens.