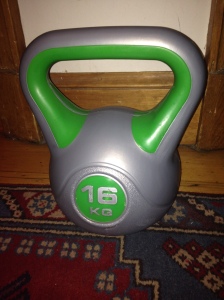 Happy Monday to you all…

Or was it happy? It was the first horrible day back to work for many today, including me. Perversely, I was sort of looking forward to going back and getting some kind of non scoffage routine going, but regretted this ridiculous ambition by 11am, when all I wanted was to lie down under the desk and have a cat nap.

You know how they say that exercise at the start of the day makes you feel good? It’s a lie. Alright, maybe it isn’t…with the exception of the first day in the office after two weeks of feasting and late nights. Despite the pain of the 6:50 alarm, I got up anyway and continued with my daily mini routine, like the trooper that I am. I do hope that sarcasm translates to text, because my thoughts are laden with it.

You see, unlike some of the other fitness fanatics at the gym, I only really have time to go twice a week due to work and childcare commitments. To become a Queen of Sparta will clearly require a lot more grunting than that, a LOT more. Therefore, apart from some personal training sessions that I will attempt to squeeze into the next month or so, I need to build more exercise into my daily routine. Hence the ten minutes subtracted from my precious sleep time. Because as all the magazines keep telling you, much can be achieved in ten extra minutes of intense exercise. The days of hour-long aerobics are over, or at least for those of us who want something a bit quicker. The classes at the gym are usually an hour, but are punctuated by intervals where you fiddle with weights, sort your wedgie, or just sit for a minute to get your breath back. High intensity, interval stuff is where it’s at chums.

As I mentioned, I got a 16kg kettlebell for Christmas, courtesy of my sister. Before you wonder if she hates me, I did ask for it. Today (and indeed Sunday, although not at 6:50 am) my routine was this: first up, stretch a bit. Then a two minute plank. Yes, that’s two minutes. Not bad for an old bird, I reckon. I blame Jillian M and her obsessive love of all things planky in levels two and three of the Shred. If you haven’t got to these yet, just you wait. After that, I admit the lower back hurts like fuck, so I recommend a nice stretch, like the child’s pose from yoga.

Following this, I took a firm grasp of Kevin, my lovely new kettlebell, and performed the following: 15 reps of shoulder height swings, 15 bent over rows, 15 shoulder swings, 15 pass it round the body hand to hand, 15 more shoulder swings then a final 15 overhead swings. After that I was nicely sweaty and went for a shower. I intend to build this up and do more reps as I go on. I’ve also seen a good exercise in Men’s Health magazine (yes, I read that: women’s health is too girly) which is a burpee followed by a KB deadlift. Unfortunately, I can’t quite bring myself to do that yet, mainly because I am a wuss.

A good start to the day I think. Breakfast of champions indeed.  In addition, I keep building more walking into my day. I work on the fourth floor of an old building with very high ceilings, so I insist on taking the stairs instead of the lift, at least twice a day. Out of breath by the third floor, this keeps me nice and hot so that I annoy all my colleagues by insisting on opening all the windows as soon as I get to the office. It seems only fair that if I suffer, we all suffer!

Another walk at lunchtime helps too. So…tomorrow the same again, although I might try some skipping instead of planking, taking care to avoid overhead lamps and other furnishings. The difficulty will be keeping this up, but I am hoping that by outing/shaming myself on the internet, I will bring some accountability to this programme. And of course, I have the added fear of being an unfit, old fart next to the youngsters in the Clan team. I swear some of them have not an ounce of body fat on their personages. Even when they sit down, there is not a belly crease in sight. Bastards.

On another note, there has been some chat on the team facebook group of costumes for the race. The most popular suggestion so far seems to be ninja. This I like because a) ninjas are cool even if a tad on the violent side and b) it could also be a practical costume for avoiding some of the inevitable mud and protection against barbed wire and other brutalities. So, today, in an attempt to avoid too much work on the first day, I did some googling to what was out there.  This first one was the kind of thing I had in mind: safe, snug and protective; as intimidating as befits a professional assassin. 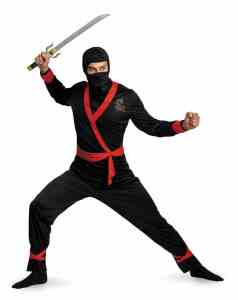 But I also spotted this beaut.

What kind of stealth killing would be possible in this get up? I admit, death by stiletto and kebab skewer may be an option, but really??? Do all women’s dressing up costumes need to be sexy? I have concluded that this get up, especially the shoes, would not be a good idea for a 13k race through the mud carrying a sandbag. Ho hum. I shall desist from a feminist style rant and move on. Monday is tough enough as it is. If anyone from the team is reading this, please note: I do not want to dress up as a gimp. Unless you pay me a LOT of money.

See you next time.