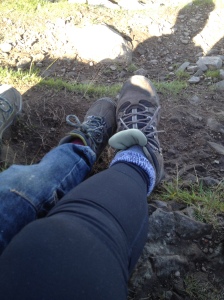 Oh, it feels Sunday-ish and a little depressing this evening. I’ve got post-public holiday weekend blues, with a busy week looming. Still, I mustn’t grumble. I’ve had a lot of fun, which I’ll come to in a minute, but I also finally gave my flat a damn good clean on Saturday.

True confessions time: I am not the proudest of housekeepers. You might go as far as to say I’m a bit messy. It’s not that I really hate cleaning, it’s just that I’m always too busy with other things. And if I’m not busy, then I want to be relaxing or having fun, not cleaning. Until recently, I allowed for the small luxury of a cleaner for a couple of hours once a fortnight. She appears to have gone AWOL, and I know that I should take advantage of a child free morning, save £40 a month and do it myself.

So alas, after many cups of coffee and much procrastination, I finally got my act together and got on with it.  While it probably wouldn’t pass any laboratory tests, it’s nice and clean enough for me. And the boy, who is a crumb creating monster and has no care for tidiness.

Perhaps he will end up as a pile creator like his mother. When things get untidy, simply create small stacks of things. Then move them around and hide them where possible. My granny used to stuff things behind cushions when people came to visit. When you sat down, you always heard the sound of something crunching. Maybe I get it from her.

While we are on the subject of cleaners, on Friday, I saw something I can never unsee. A friend and I were spending a few idle minutes spinning the wheel of possible fortune that is (ahem) Tinder. ‘Angela’ flashed up and I have changed her name to protect her identity. Angela is a dark haired man from Perth, dressed in a pink maids outfit, including a little cap. Her profile informed us that:

I do enjoy dressing as a submissive sissy maid to carry out chores in the household. I enjoy obeying and letting the superior sex in this world rule while I am humiliated and punished if chores are not carry out correctly.

Now, it’s fair to say at this point, my interest was piqued. Someone who wanted to come and clean my flat for free? It’s a win win. Unless he needed someone with a cleanliness fetish, which is where I would fall down. We checked out the other pictures, and lo and behold, in the next one, he was cleaning the toilet bowl. With his tongue. He had a further, close up shot of his head down the pan, so I’m guessing that’s a favourite chore.

I mean, whatever floats your boat of course, but I really wasn’t expecting that. Despite the tempting possibility of some free household labour, it was a clear swipe left situation. Just no.

Back to the fun part. The cleaning was satisfying but it wasn’t exactly enjoyable. And there was some autumn sunshine out there to be got at. On Sunday lunchtime, the boy and I were running his first obstacle course race. He has wanted to do one since my Spartan run, and this one was only a mile, and specifically aimed at parents doing it with their kids.  There was a five and ten kilometre obstacle race for adults earlier in the day.

Some of the parents doing the kids race had completed the 5 or 10k race and were already wet and muddy. Just in case anyone thought I was a cop out for turning up just to do the race with him, I wore my Spartan finisher t-shirt to display my ninja like credentials. Possibly a bit sad, but fuck it, I earned that t-shirt and therefore get to show it off whenever I like.

It was a gorgeous day and the race was in one of those lovely estates you get in Scotland with a big turreted house set in woodland, usually owned by a trust, a Russian oligarch or the over privileged gentry. The race itself was great fun, the obstacles were children’s versions of the Spartan type things, like wading through streams, crawling in mud, over and unders and carrying extremely light objects. The best bit was at the end, when you slid down a hill on a foam slicked tarpaulin, then onto the muddy grass for the last bit of the slope. In true QL fashion, I went down on my belly, swooshing mud all over my face as I picked up speed at the end.

Doing something like this on a small scale with my son, was a great afternoon out. And he loved it, sprinting away fearlessly. The obstacles I saw for the adults looked fairly straightforward in comparison to the Spartan. And the other good thing was that it was easier to run in this one; there were a few wee hills but nothing to ruin your day. It doesn’t stretch the realms of possibility to think I might do one of these smaller ones sometime. In the winter it could be a lot of muddy fun.

It was another gorgeous day today. The boy and I had planned to take to the hills, and we did, although he only managed half way up today after the excitement of the day before. It was a bigger hill, so I’ll let him off even though I was disappointed that the walking was cut short. We still managed a couple of hours up and down, When I was walking up the hill, I found it much easier than the last time I did. I wasn’t expecting it, but I felt the benefit of the last month. And that’s a good feeling. The feeling that things are finally shifting, that progress is being made.

It’s been a tough month, no denying it, this last week being the hardest. There has been additional sugar consumption, not a huge amount perhaps, but an increase. I curse those all butter pistachio and almond cookies from today. And a further true confession: I am impure – there have been two fails in the Dryathlon. Which is pretty rubbish I know, but both justifiable in my book and under the circumstances, it’s miracle that it’s only been two. And who cares anyway, when it’s made such a difference to things?

Fall down seven times, get up eight.