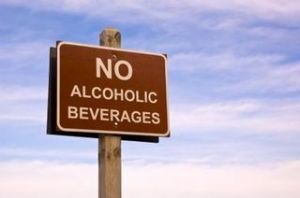 It is now Dryathlon eve, and I am easing my way into it by enjoying a last couple of small glasses of red, the end of a bottle from the weekend. Obviously, there must be no temptation at hand, no dregs allowed, lest I cave immediately. Don’t come to my house if you want a drink.

For some people reading this, especially my sportier readers, there would no challenge in stopping drinking for a month. You are sensible, healthy minded and bodied people and I am jealous of you. There are others who will identify with the struggle.

It’s not that I want to drink to get drunk, although once in a while I do. There are two drinks I like in a day. The first is after I’ve got home from work, sorted the boy’s dinner, and got into my comfy clothes. A glass of wine or beer at this point is just aahhhh…the same blissful feeling you get when you take your bra off. You have switched off the day and know you have nowhere else to go, you are just home.

The other one is later on, just before bed. Maybe a whisky, or if I had a cold, a hot toddy. I like this while reading my book, just before going to sleep. If all else were eliminated, I would like to keep those two. And if that were the extent of my habits, save the odd social occasion, I would be quite happy.

But like many Scots, I am less moderate. We live in a drink culture; we like our drink. And we are killing ourselves with the drink, with ignorance and fear. At a work drinks do recently, people were astounded at a young male colleague’s decision not to have a beer. If you’re not driving, then there is something wrong with the refusal to take a drink, that requires an explanation.

If you look at this through the eyes of another culture, it’s completely fucked up. Essentially it’s like telling someone they should take a drug. No-one would ever be mocked for not drinking of an evening in a French or Spanish café. Instead we should be saying, good for you, you don’t need alcohol to go out and enjoy yourself.

Despite my admiration of this attitude, I will probably avoid pub type situations in the beginning. Food is okay as that’s the focus, but straight up drinking nights out are to be avoided for the month. I am going to a puzzle thing on Friday evening. A group of us get locked in a room and have to puzzle our way out, which sounds like lots of fun. I wonder how long they give you if you fail to solve the puzzle. Probably about five minutes if there’s another group coming in behind you.

Getting to see some films will be a bonus. And who knows what else? Definitely more early nights for the early gym rises. I have already upped my membership, to put my money where my mouth is. Or invest in my health, as my coach put it. I am hoping beyond hope that I will be full of energy and less tired than I am now, to enable all the 6am wake up and go calls.

There’s one fear right there, that if you take away booze as an excuse, I am still too lazy to get up and go to the gym, especially knowing there may be horribleness ahead. Am I just full of shit, not really able to hack it, even for just one month? Clean living, one of these normal people you see and wondered about, who don’t drink or do anything that you know of (they will probably have some kind of ‘perversion’ somewhere, most of us do). They are just happy as they are.

Which is the key right there. If you’re not happy, then depending on your circumstances and situation, you might use and abuse various things for solace: food, alcohol, drugs, sex, gambling…whatever. NB This is not my personal checklist.

Temporary solace is fine. We all have those periods of going a bit off kilter for a while. Perhaps we need them. By all means, go a bit crazy for a while, numb the pain of things. But only for a little while, lest these things become a habit, then something that you cannot break. And whatever you do now, you have to let the pain out at some point. Trying to numb it permanently equals death.

Which brings me to my biggest fear about it. I will have to go through the emotional shit storm that is coming with nothing stronger than a cup of builder’s tea. No painkillers.   I will have to feel everything, which is horrible but okay. A wise friend said I should forgive myself if I slip during this period, and she is right, but I don’t want to. As hard as it may be, and as natural as it feels to open a bottle of wine when the shit hits the fan . I say that, sitting here with the confidence of the last few swallows of wine in a glass. Tomorrow will be harder, I know. 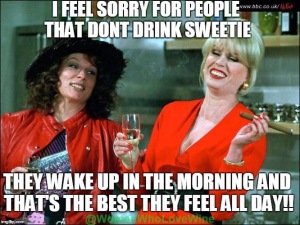 Some of this will get worked out in the gym, some over coffee with friends, and through walks and cultural activities. It’s basically a modern, first world problem; people survived much worse after the war with only Bovril to drink. And maybe not even real Bovril but dirt granules disguised as. But panic ye not, this blog won’t become a month long whinge about the lack of wine in my life.

There could however, be some moments of discontent, maybe even a smidge of grumpiness in the early days, as I ponder my post work chillout options: smoothie or downward dog? It will require some getting used to, especially at the weekend. Discombobulation. Which can also be a great thing, opening up different doors.

This is the thinking I need to focus on, not the other. Like the fear that the 100% sober me will struggle to be as brave and sociable as the one that’s had a drink. That she would be a lot less confident in talking to strangers in pubs in Glencoe without a few sips of beer first. I suspect everyone who worries about drinking too much and wanting to stop thinks exactly the same thing. I’ll just deal with it as I go along.

One last thing. I’m not doing a big fundraising drive because people sponsored me for the Spartan race, but they automatically put a fundraising page up for you when you sign up. I’m just putting my booze money in it. It’s also a bit embarrassing to call yourself a dryathlete for giving up booze. But it is for cancer research UK, so if you did feel moved by my patheticness and wanted to sponsor me and make a donation you can do that here.

The last sup has been had.