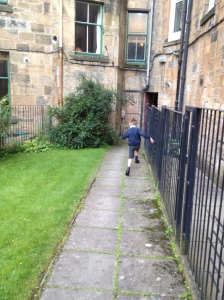 ‘Schoolbag in hand, he leaves home in the early morning…’

Ah, the bittersweet joy that is seeing your child step into their first day of school. The sadness is feeling your little baby finally grow up; you’ve been seeing the signs for a while and letting them glide by, but once they are right there, in that uniform, with the black shoes and everything, then Kappow! It hits you right between the eyes. Yes, they are going to be dependent on you for a good while yet, but essentially, they are gone. It’s the first stage of their journey into life, away from you.

Like many parents, I’ve been working from before he was a year old, and have had to entrust the care of my son to a nursery on four days a week. So it’s not that I can’t leave him all day. This is different. The nursery was great and did well to prepare him for school, but it always felt like a caring replacement for me while I was at work, rather than an independent force. Whilst he clearly loved the nursery teachers, I never felt that dread feeling that I know is coming. When they have their first crush on a teacher and think they know everything. Instead of you.

Don’t get me wrong. I’m not the type of parent to pretend that they know all the answers. I try and answer all the questions that he throws at me, random as they are, as honestly as possible. But sometimes I say I don’t know. Disturbing as it is that at five years old, he already knows I am a bit rubbish at some things, I am still the predominant female figure in his life. That is about to be changed by the arrival of his primary one teacher Ms W, in his life. And it will no doubt change mine.

We all remember a bit of primary one, don’t we? My main memories are of my lovely teacher Mrs McCaffrey, who had glasses and orange and brown striped dresses. I also remember being asked by a visiting priest who my favourite pop band was and answering ‘Showaddywaddy’. My other main memory is that one day I pooed my pants in the classroom, for the simple reason that I didn’t want to put my hand up and say that I needed to go to the loo mid lesson. I remember sitting in the warm kitchen after they had cleaned me up, waiting for my regulation brown pants to dry on the kitchen pipes. The strangeness of the fears of childhood. Learning the tribalism and rules of engagement with other kids, alongside the letters and numbers.

He’s a step ahead of me at that age, as I didn’t go to nursery or playgroups, just straight to p1. He’s used to being with different kids in a small space. And he’s big for his age, which could be good or bad; I don’t know the rules of boys. All I do know is that he is brave, smart as fuck and charming as hell, so hopefully he’ll be okay. Sometimes it’s much harder for us parents to let go. They are ready.

And that’s the bitter part of the sweet. We know that while their innocence will still remain for a few years yet, this is the beginning of the work of life. Primary school education is encouraging and rigorous, but gentle and supportive. Certainly compared to the jungle that high school can be. He’s at the stage where you think you really can be a builder and a spy when you grow up. There’s another seven years before it becomes learn, pass, work, succeed, earn, buy. Indoctrinate.

I’m not saying all education encourages that; my interest in literature, history and politics was encouraged at high school. But still. It’s still all part of the system. And now my wee boy is on the first step of that, excited to be leaping in. And there’s the joy.

It’s a joy, that they have come this far and we are so damn proud that we have got them there and of the people they are becoming. But it also breaks our motherly hearts. I’ll say mothers this time instead of parents; it may be the same for fathers, but I don’t think it is. My own mother had a stock phrase she used when she was being unreasonable (or at least as I perceived it) as I pushed the boundaries growing up: ‘when you’re a mother one day, you’ll understand’. And now I do understand. It’s about the overwhelming love, and the desire to keep them safe and stop them from growing up and away from you. But that is exactly what we must let them do, as hard as it is to let go of the memory of that tiny bundle who depended on you for everything.

I am not a mollycoddler. I do let my son take risks, for example, in his climbing of rocks and jumping in the sea. I let him be scared but try things, knowing I am there and watching, with my heart racing until I see him confident in his steps. This makes him braver and more fearless than me. Despite his confidence, school feels like the first time he is properly out there, in the big world. Without me watching.

He will be fine I know. Thrive, even. But it’s a period of adjustment for us all, getting used to new routines. I was worried I would be upset today, dropping him at school and I felt emotional about it last night. Getting him dressed and ready this morning was exciting: he couldn’t wait to go. He looked so grown-up, so ready. It was then it struck me that he was gone; I am amazed that I didn’t cry.

For the first morning, the parents took the children in to their classroom to meet the teacher and find their desk. We then started to slowly clear out. Just as we were leaving, my ready boy got upset, and clung on unexpectedly for a last hug. The vulnerable toddler surfacing. I was a little bit relieved to see it. He may be moving on, but that need for a reassuring squeeze around my neck reminded me that he is still my wee boy. One that I am not quite ready to surrender yet.

It’s been a big day; one I’ve been expecting but a bit surreal nonetheless. We will quickly get used to this new life. And for my son, he has a new and exciting world of opportunity in front of him. I am looking forward to the learning this brings for him and for all of us. And the challenges, such as managing the endless school holidays.

It’s another stage of the journey.