In the bleak midsummer, there is a tiny ray of light. After watching all my colleagues and friends head off to the sunshine and then return, my summer holiday is almost here: just two days to go. The summer here has been totally shit. Whilst it’s not been exactly Baltic, it has rained A LOT. Glaswegians everywhere are recalling the halcyon days of last summer when we had the Commonwealth Games and the sun shone every day. All the bars and cafés had outside tables, and for a fortnight, our grey city was transformed into a cosmopolitan hub of sport and culture, the streets thronging with international visitors. Sigh…

This year, it’s been a damp squib, with only a few days of sunshine puncturing the gloom. My holiday will consist of a week in a fishing village on the Northern coast of Scotland; a risky venture given the weather so far. I am hoping for some warm, sunny days as when we get them, Scotland is one of the most beautiful places on earth. However, I am such in need of a break, I honestly don’t mind if it’s not scorchio. Being off work will be a good thing in itself. And if it rains, at least I won’t have to worry about the (duh duh DUHHH) dreaded beach body (cue sound of screams, wailing and gnashing of teeth).

Ah, the beach body. Virtually all magazines have been advising us on this matter since the spring, trying to get us to primp and prime our bodies in preparation. And of course we have ignored them; we’ve continued to stuff our faces, let our heels stay scuffed and our legs remain pale and stubbly until a month before. Then it’s time to hit the panic button. Thankfully at that point, we can turn to our saviours, the magazines, and find a ‘get beach body ready in four weeks!’ article. And if we still don’t act, then I’m sure later on we can find an emergency 14 day beach plan, involving liquids and starvation, which doesn’t matter, as long as we can squeeze into that bikini, right?

None of this stuff is anything new. Although I’m sure some men feel insecure about getting their pecs out on the beach, there is nowhere near the same level of scrutiny and body shame that there is for women. Most of it brought on by ourselves. The anti-beach body quote: ‘How to get a bikini body – put on a bikini, go to the beach’ has been floating around the internet for a while. So I was surprised by the level of outrage towards this advert on the London underground earlier this year: 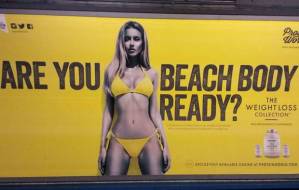 Sure, it’s offensive. But aren’t we used to seeing stuff like this everywhere we go? Most of the time, it just rolls over me like the proverbial water off a duck’s back. I only seem to get really pissed off when they start to make judgements about my fanjo region. This particular advert is no worse than the ads plastered over every woman’s magazine, every month. That doesn’t make it any better, but I’m just curious about why this one created such a backlash. Some of the responses were comforting and reassuring, but this is stuff that women know.

When we go to the beach, we see women all the time wearing swimsuits and bikinis that don’t match the ideal. In other situations we might cover up to hide our flabby bits, but at the beach we don’t. Everyone is in the same boat. If we want to swim, then wear a swimsuit we must. And let’s face it, we’ve all seen sights that ain’t exactly pretty there.

What about those teak-tanned, middle aged men you see on every beach in Europe, enormous bellies protruding over their tiny speedos (budgie smugglers, as my dad would call them)? I think their beach ‘preparations’ would have involved exactly three seconds of thought, as they threw the smallest shorts they could find into a suitcase. They might give us brief pause to wish they were wearing a slightly larger, baggier short, but apart from that, we don’t give a toss because we’re there to enjoy our own holiday.

This applies for women too. There may be beach bitches who assess everyone on their bikini performance, but many of us are reassured to see the wobbly bits of women who probably look really slim with their clothes on. That’s the thing about the beach, it’s a great leveller. And we’ve seen a slew of so-called brave women of different shapes and sizes on social media recently wearing nothing but their underwear or bikinis, to show how we are all beautiful, however we look.

On one hand, I admire the sentiment behind these posts, because it’s true. We don’t need to look like the women in bikini ads because no-one really does. Not even the women themselves, who despite being models with great bodies, are digitally enhanced to make them look perfect. I could look like that too if I had a tub of St Tropez, a can of airbrush spray and clever lighting following me wherever I go.

On the other hand, I am sick of seeing posts of semi-naked women all the time. To me it goes against the point. Why do we need to see women without their clothes on to have their beauty validated? And why are we still judging women solely on their looks and so-called beauty anyway? If someone is drastically overweight, I can pretty much guess she looks chubby in a bikini. If she wants to wear one, good luck to her. If she posts it on the internet, she will be part admired and part trolled, but in the end, what difference does it really make? You don’t add value to the fight against body fascism by taking your clothes off.

My suspicion is that most of the women who make these posts are not much more than attention seeking narcissists, who don’t really care that much about feminism. I don’t want to single people out but the one below really pissed me off.

The woman posted it on some site to show she was proud of her post baby body, and to say she wasn’t embarrassed about being in a bikini. She then got tons of comments gushing about her bravery and compliments on her body. Really? Brave? Fuck. Right. Off. She’s slim and attractive with a tiny wrinkle on her tummy. Anyone who’s seen their friend’s holiday photos on Facebook will have seen hundreds of women like this. What’s the big deal?

This woman is brave.

This picture is hard to look at. She has survived cancer and most of the time she has to cover up these battle scars to make other people feel comfortable. While it goes against my original point, there is value in normalising people – men and women – who have bodies like this. We shouldn’t be afraid of how she looks, or make her feel that she can’t wear whatever she wants to on the beach. In this instance, showing what is usually seen as shameful and hidden does make a powerful point.

Advertisers are just playing the game with us: they want us to feel bad and buy stuff, or look up to role models and buy stuff. None of it is real. If it was, no-one would ever have sex with anyone with stretch marks or blubbery bits and the human race would have died out by now. So fight the good fight against the notion that all women should look like size zero models. But if you don’t want to be objectified, for crying out loud, do it with your kit on.

I’m off to a cold, windy beach now and I’ll probably be wearing a coat. I’ll see you after the holiday.