Some kind of paint splattered, running miracle has occurred. I rolled up to the Colour Me Rad 5k yesterday and actually enjoyed myself, despite the rain and the fact that half an hour before I left the house, I was lying in my bed with a cup of coffee, wishing I could stay there.

The fun element was strong. The race pack came with a temporary tattoo, which once on, magically re-ignited my feisty spirit. At the park, there were five colour stations around the course, where willing volunteers splatted us with paint bombs. There’s something joyful about getting covered in multi-coloured paint and getting messy as hell. As the run got busier, you had to slow down and walk through to make sure you got pelted. And we all wanted to get pelted, not just because the walking break was more than welcome.  Here’s my and my sister at the end, who hopefully doesn’t mind being pictured in this post: 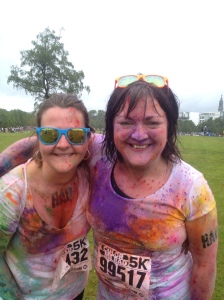 What’s the big deal about not stopping anyway? I read a feature in last month’s Men’s Health, highlighting research that demonstrated overall improvement in your running time and form, if you stopped to walk for a minute every mile. I am all for that. Not because I am bothered about my time or form, but because a rest is good and I do find that it helps with endurance. In the same magazine, they had another feature with yet more research, that showed long endurance runs are no better for your health than several half hour runs of about 5k. In fact they are worse, as they are more likely to give you long term joint and muscle damage.

So bring on the 5ks! There will of course be sane, healthy people who like to go for several long runs a week, but I reckon most of them are either people who are batshit crazy and battling their demons, or are using running as a replacement for other bad habits.   And I say that in the nicest possible way, as someone who has her own share of demons. I just prefer to exorcise them in other ways, like writing or flinging bits of iron around. 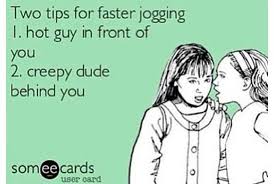 Having said that, the run yesterday came at an ideal time, as with only three weeks until the Spartan Race, I was beginning to worry about my capacity to run at all. But running in a big crowd at an event really does spur you on. I went for a wee run at lunchtime today with another Spartan team mate who also feels that the team aspect is crucial. Without the support, he knows he will probably just give up when it gets too hard. I agree up to a point. Although I like to train in a team for that reason, I will also be okay if I fall back from the team on the day. Like Blanche DuBois, I will rely on the kindness of strangers: there will be other people around to help and spur me on which is just as useful. Plus I know I will be too slow for most of my own team. Yesterday, there were loads of people walking the whole 5k who had clearly come for the party atmosphere, and that made it feel more relaxed and non-competitive.

For me, that’s an important thing. It’s not cool to admit it, but I can get pretty competitive, although usually only about non serious things like quizzes, Connect Four and Snakes and Ladders. I’m not so bothered about people earning more money, or with better cars or flat bellies. Okay, maybe the flat tums are tough to take. We have a pedometer challenge in work every year, and normally I enter. Last year I was even a team captain. Cue much banter, wind ups and competitive rivalry in the office. There was someone who appeared to be cheating on their steps and it managed to annoy the fuck out of me. You might wonder why I should even care, after all they were only cheating themselves as the saying goes. Because their team beat mine, that’s why. 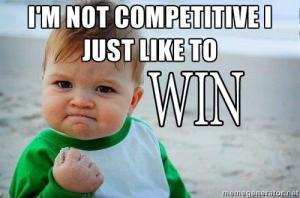 So I decided that this year, I would give myself a break and not participate. Right now I have enough to worry about. Aside from the competitiveness, one of the annoying things about pedometers is that they often malfunction (unless you have one of those super fitbit type doohickeys, which are pretty failsafe). In my experience, the malfunction tends to happen when you’ve just done a satisfyingly massive hoof around the park; realising you have just lost thousands of steps makes you want to scream with frustration. Not doing the challenge this time fits with the Buddhist advice I had months ago: remove yourself from stressful situations, so you can remain calm. Instead of getting worried that everyone else is walking more steps than me, and obsessing over how the lazy sod who sits all day and never does exercise gets 13,000 steps a day, I can now cheer everyone on and go for lunchtime walks with any of the teams that will have me. Phew.

If you are new to exercise, and not a competitive freak, then a walking challenge is a great idea: walking is easy, free, enjoyable and a good way to build up fitness.   If your smartphone is never out of your hand or pockets then you don’t even need a gadget, as you can get a pedometer app for free, such as Map My Walk or Pacer. You don’t even need to compete, just challenge yourself by measuring out how much you walk in a typical day, then add 2,000 extra steps a day until you get up to a minimum of 10,000. This chart shows you where your normal steps grade you:

As much as I love walking, for the foreseeable future I must run. Running the 5k yesterday was relatively easy, but today I was rubbish and I struggled. My legs were tired simply because I am so out of practice at running. Like it or not, I will have to do it a lot more until the race is over, because practice is how you get better at things. Arse and feck biscuits. However, yesterday has given me back the faith, that even if I have to plod or walk along, I can get round this course. I had lost this Hell Yeah attitude for a while. It might still be more of a Hell Maybe, but that’s got to be better than Hell No. Maybe I’ll tattoo it on my arm.