Blue was the colour of the weekend sky and blue is the colour of my mood today. Two days break is just not enough, and I have struggled to focus today. My thoughts were half on my inbox and half on a sunny hill in Glencoe. To be honest, it was more like two thirds Glencoe but at least I tried. We all know that painful feeling of having to go back to life when we’re not ready. I was just settling into my groove when I had to pack the car and head back down the road. Sigh.

Glencoe is a special place, which you will know if you’ve ever been there. The scenery is stunning and I was fortunate to get a truly bonny weekend. On the way there on Friday afternoon, I stopped in the middle and walked through to the Hidden Valley. It was a great wee walk, constantly up and down, over boulders and stones, to a wide plateau surrounded by mountains. This was where the MacDonalds hid their cattle in the Glencoe massacre (clan warfare/politics) and they must have been some seriously tenacious cows to get there. When I arrived for my picnic, I was the only person there. What a stroke of luck to have such a place to myself! The grass on the ground was soft and springy, so before anyone turned up, I did a fast ten burpees, just for the hell of it. I had already completed my daily 30 at home before I left. Burpees may not be much fun, but they were definitely improved by the surroundings.

The other thing I had to do quickly do was pee. There was not much cover in the valley, so a fast movement was required. One of the many things I will miss about my little holiday was all the outdoor weeing. I’m quite proficient at it; no splashes on the boot and no SheWee required. There’s something liberating about getting your nethers close to the heather and a fine breeze about your fanjo. My bladder capacity is not what is was pre-child, so it’s fair to say I christened those hills good and proper. One of the small joys of life, taking us back to our animal natures.

On Saturday, the day dawned bright and blue and I was all about the pap. It’s not a huge hill, but it’s a relentless, breathless walk up, over streams, bogs and stones, with a lot of scrambling over boulders and loose scree. This skidding underfoot is an unsettling feeling. Even while still panting on the way up, I was worrying about the climb down, which I always feel most nervous about. There is so much potential for a slip and a tumble down a steep slope. There is a path of sorts, often looking like steps cut out of the grassy hill. Sometimes the path is barely visible, steps only appearing just as you clear the one before it. Sometimes these steps are not true, causing your foot to squelch into a bog or slide on mud. There was much squelching and gasping on that descent. Good Spartan training I reckon. 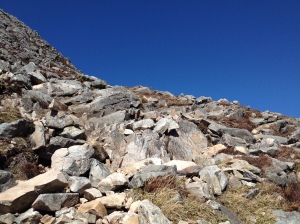 What I liked most about the descent (apart from the fact that you can breathe more easily when not hiking uphill) was that I was afraid. I was afraid because I was alone, and can be clumsy footed. I have been known to trip and go arse over tit on normal pavements for Christ’s sake. Although my landlady knew where I was going, if I fell, no-one would know straight away and raise the alarm. I had to trust in myself. My natural instinct would be to tighten my legs, trying to keep control. In fact what works best is to relax, don’t worry too much if you speed up a little and take care of yourself. Probably a good lesson for life. Aside from that, all the tough stuff was worth it; the view from the top was just beautiful. 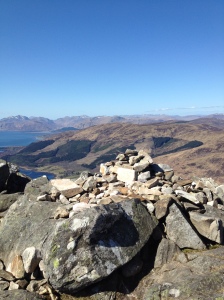 What did I learn from this trip? I love walking in wild places but I already knew that; it’s one of my favourite physical activities. There were moments, when there were other people around taking their summit selfies, that I missed having someone else to share the magic with. But mainly I didn’t. I was happy and comfortable with my own company. Walking along, there was no need for conversation, just the focus of breathing and watching the scenery unfold. No music was needed, just the sound of the wind and the birds. Before I went, I did worry about feeling lonely but I didn’t at all. On Friday night in the village pub it was very quiet. No-one spoke to me but I wasn’t bothered. I was re-reading an old, evocative, favourite book, Electric Brae, which is partly set in the Glencoe mountains, and feeling all Scottish and happy as I ate my food.

On Saturday, I walked the three miles to the Clachaig Inn and had a great night in the Boots Bar. I had forgotten how welcoming those pubs can be; how easy it is to fall into familiar banter after a pint or two and a whisky. And it’s not sleazy. Mind you, I did get an offer of a room at the end of the night after no flirting whatsoever, but the very drunken man knew it was ridiculous even as he said it. There’s a Scottish trait where we take the piss out of people if we like them. If they smile and sling it right back, they’re in. The Clachaig is full of people like that. The people who drink in these pubs like hard walks and mountaineering. They like to challenge themselves and then have fun at the end of the day. I realise that I am one of those people.

By Sunday, I had stopped noticing if people noticed I was on my own. I just didn’t care. If you are someone afraid to do things on your own, don’t be.   It will never be as scary as you think, and the rewards are great. In future, I will be off for a walk as much as I can. Without losing your connection to other humans, find your thing that you love doing on your own and do it as much as you can. That’s where a lot of happiness lies.

A swing of the axe

Days like sodden logs line up in the rain.

Here’s to the few times we go

with the grain of our own life

as wood knows the cutting edge

when it splits wide open.