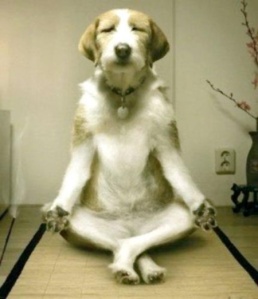 Shouting is not the done thing at a Yoga class but I think it should be. Why not? Anything that involves contorting yourself into unnatural positions and plenty of planking deserves a grunt or two. The teacher today said yoga shouldn’t be too hard, but frankly, it is. So is weightlifting and if you’re allowed to shout out at a wobbly leg in that, then surely the same rules should apply. And what is the salute to the sun if not a slowed down burpee? Talking of burpees, I have stuck to my 30 a day since Friday, no matter what else I’m doing. And it hasn’t got any easier, just like yoga.

I’ve tried different yoga classes over the years, including pre-natal and mum and baby yoga, but never really stuck at it properly. Not out of dislike, just life getting in the way of going to the one class for a long period of time. And I imagine that you need to do yoga very regularly to get the most out of the practice. Sure, I use some of the stretches on a regular basis – forward bends, cats and child’s pose are almost daily staples for me. But only for about five of ten minutes a day to loosen my spine. I’ve never tried to do much on my own, or mastered the really hard ones. I am not so bendy. In my mind, I want to look like one of those relentless pictures on social of people doing yoga on the beach or up a mountain. See below: 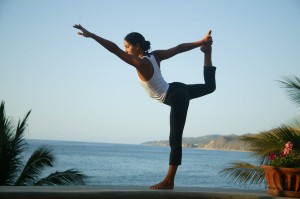 Why are they always by the sea? Most of us do yoga in crowded church halls or small urban spaces, almost nose to tail with our classmates. These zen like photos bear no resemblance to reality and just annoy the fuck out of me. I went to a class at lunchtime which was in the smallest room in the gym. It wasn’t hot yoga but after half an hour it was pretty toasty.  I could hear the guy next to me breathing through his nose and no doubt he could hear me squeaking. In front of me, a woman’s bum bobbed up and down during the downward dog. Not a very transcendent experience. 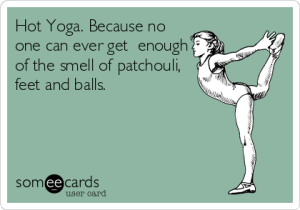 Having said that, I enjoyed the class. I went for a run yesterday and today was as stiff as a pipe. Yoga was the perfect way to break up the day after a morning spent sitting at my desk. By the end of the session I was able to touch my toes again, clearly demonstrating the benefits. The teacher was good, talking everything through and even ran over at one point to try and help me grab my ankles from behind when I couldn’t reach. Even with her weight on me, I still couldn’t get them.  Most of the exercise I do tightens my muscles, so I am hoping that sticking to a regular class will make a big difference. I liked the teacher and the class was fairly mixed ability, although there a few women who were more advanced. And only one serious yoga poseur. You know, the ones who stare at themselves in the mirror all the time and wear those co-ordinated combinations of endless, perfectly placed layers, with footless tights and shorts. Fuxake, it’s warm when you get going in that tiny room. A top and leggings will do.

The trouble I always seem to have is concentration. Learning the right way to breathe is hard in itself. As soon as I’ve told which move to do on the in or out breath, I’ve forgotten it. Then I worry that I’m not doing it right and eventually I forget to breathe altogether, until I turn purple and the teacher reminds us. Why is it so hard to keep track of your most instinctive bodily impulse while doing yoga? It’s not like I can’t relax other bits of my body. Sometimes too much. I am ashamed to admit that I have farted in a yoga class. Thankfully, it was more of a soft parp rather than a trumpet, so I think I got away with it. Ever since then, I have been careful. Butter bean mash was almost on the cards for supper last night, then ruled out because of class today. A lucky reprieve for the other lunch hour yoginis. 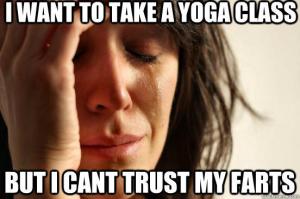 Yoga will certainly help with the Spartan race physically, but I need to do it for other reasons too. I want the spiritual and mental strength from it. For life, not just for Christmas. Unfortunately, much like meditation, this is the bit I find the hardest. I find some asanas hard and others fine, but I never get any meditative vibes or particular feeling of bliss, apart from the usual post exercise glow. Perhaps I am worrying too much about the poses and breathing to relax, apart from when I’m lying on the mat at the end. Even when I am fairly still in a comfortable pose, my mind is going like the clappers, as in this wonderful cartoon. 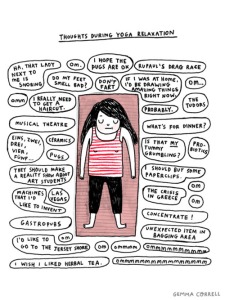 The secret is of course, like progress in any discipline, practice, practice, practice. Just because yoga is physically gentler than many other exercises, it doesn’t mean you can just show up to the mat and twist yourself into a tangle straightaway. You need to learn the hard stuff gradually. And nirvana doesn’t come easy. It might not come at all. Tough, when you just want instant karma.

If I am serious about getting the full benefit of yoga, I need to do the work just like everything else. I wonder if I’ve got the patience and the time for it. Or it’s another case of ‘stop thinking about reasons not to’ and JFDI (just fuckin’ do it).  There are infinitely more reasons to do it than not. And if I need one more, this picture I found while browsing tips the balance, even if it is by the bloody sea. A handy position for everyday happiness and well-being. 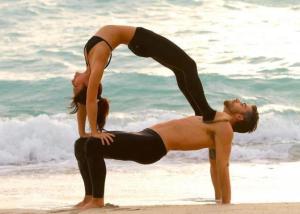