There was a strange moment of silence at the end of the lunchtime gym session yesterday. Coach had to go, leaving a key for us to lock up behind ourselves once we had finished our last attempts at PBs (personal bests, for those unfamiliar with the term). When he left he took his phone with him, leaving us without a playlist.

We all looked at each other and laughed; without music, we suddenly felt more exposed. Yesterday was all about getting the highest possible weigh for three different lifts: back squat, strict press and deadlift. When you rest in between lifts, you generally watch to see what other people are doing, especially if there are folk lifting really heavy stuff – it’s a bit like World’s Strongest Man in close up. If you are working in pairs, you watch to give encouragement and support to your partner.

The irony is that while I love a good, shameless nosey at what everyone else is up to, I don’t want anyone to look at me while I’m working out. Apart from assuming that I look like a constipated monkey, I don’t want to be spotted making an arse of myself. 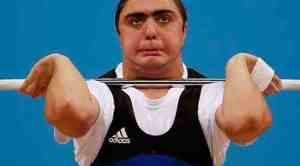 Clearly music does not give us a magical cloak of invisibility; people can see me being rubbish whether in silence or with music. But what it does do is help me get into the ‘zone’ and be less aware of whether anyone is watching or not. It also helps cover up some of the noises you make when working out hard. I can now guess what some of my gym-mates sound like when they are having sex, which provides me with a source of great amusement. But there is no point in being embarrassed by these emissions – we all make them, and a good grunt can help you get the push you need, ask any woman in childbirth. Less inhibition equals better performance – a golden rule that applies to many areas of life, including sex. 

Ahem…back to the music. There are numerous academic studies that can be found by a quick Google, telling us what we already know: music gives us a psychological and physical boost when exercising. Listening to music can increase motivation, distract us from the horribleness of it and increase our speed. I know that with something loud and funky on my headphones, I can fly up the stairs at work and be near the top before I’ve even noticed that I’m painfully out of breath. Some studies have focused on the types of music and its impact on feelings of power and strength, not just physically. In one experiment, participants who listened to music with higher bass levels scored higher in word tests relating to the theme of power. Tempo of music has an impact too: sure it can help us go faster, but a mellow tune can help slow us down when we need to pace ourselves. 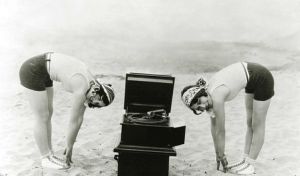 For some of us, it’s an essential. I am sure that if I loved running, I could stick my trainers on and go out under any circumstances, but for me, running is more like something to be endured. Therefore I need to be motivated, either by running in company or listening to music. Interestingly, the guidelines for Parkrun (a free weekly 5k happening in a park near you) recommend that you don’t wear headphones for two reasons: to enjoy the spirit of running in a community (and avoid collisions with other runners) and so that you can appreciate running in nature without distraction. I like this notion and agree with the ethos. Like hillwalking, you don’t need music to enhance the feeling of freedom you get from being out of the city and out in a beautiful place. The downside of no music is hearing your breath. Years ago, after a few attempts at running by myself, I went to my first park run. Without headphones on, I was horrified to discover that I sounded like an asthmatic having a heart attack.

When it comes to the gym, or working out at home, music most certainly keeps me going. Despite my love for La Michaels, I have been known to turn the volume down on the Shred and put on my own tunes. At the gym, the music is picked by the Coach, so no choice there. The music tends to be in the metal/rap/soul vein, which is fair enough when you’re flinging yourself around or lifting heavy stuff. Shitey techno (a technical term I believe) is also popular with some; I suppose the high number of beats could be motivational but it just annoys me. Whilst many moons ago in my youth I was fond of dancing all night like a loon, these days most electro music just leaves me cold. Apart from the high pitched, speeded up variety (most commonly overheard via the bleeding earphones of fuckwits on public transport), which actually ignites a boiling rage within me.

So if music be the food of sport, what should play on? There are tens of thousands of lists all over the internet, focused on all sort of sports. You can buy CDs – the best running CD ever, music for yoga, music to play croquet to, etc etc. Personally, I don’t have one ultimate playlist, as there is so much great music, and any of it can float my boat at different times. Frankly, this could all change by next week. But ignoring this, and in the spirit of Nick Hornby, I have come up with my Top 5 (in no particular order) songs for various exercises, good and horrible:

Song for burpees: When the Levee Breaks – Led Zeppelin

Burpees are horrible, there’s no getting away from it. Unless you are one of those super-duper people (I have seen them) that look like they bouncing off the floor, you need something slowish and steady that also has power behind it. I choose Led Zep. I love Led Zep and could probably find a tune of theirs for anything, but I’m narrowing it down to one.

Squats are the champagne of exercise someone one told me. Anyone can do them, no equipment needed. The lower you go and the faster you go, the better off you are. This tune is a cover of a NWA song, but I love this version. It’s fast and furious and if you get fucked off with squatting half way through, you can jump about cursing the state of the world. Ideal.

Song for wallballs: Ain’t got no – Nina Simone

Wallballs are where you squat down, then throw a weighted ball (doesn’t need to be heavy) about the height of a picture rail, catch it, squat down, repeat. Sounds easy but after 20, you ache a little. After 50, you might want to cry a little. This tune has enough bounce and positive vibes to get you through when you would rather throw the ball at someone’s head.

Dancing is obviously not a gym exercise but perhaps it should be part of the warm up or cool down. I bloody love this song and it gets me swinging my pants every time. Dancing is good for the soul and if you dance like nobody’s watching, it’s great exercise too. Get your freak on, you can’t go wrong.

Agree, disagree? Let me know your best tunes for sweating up a storm.