It’s fair to say I’ve been a lazy arse since my last post. My PT session was cancelled on Friday due to snow, as was the gym on Saturday morning: the coach was trapped in a traffic jam. For a nanosecond, I considered going out for a run instead but, adopting my ‘what’s the worst that can happen’ philosophy, I realised that there was every chance I could slip and fall – I am a bit of a clumsy clot. My ankle has only just recovered from a sprain in December, so it seemed wise not to risk it. Instead, I wrapped myself and the wee fellow up in a duvet, drank multiple cups of tea and watched Where the Wild Things Are. All without a drop of guilt, as it was clearly not my fault the gym was closed. Bliss. I almost got up early for a Shred today, but stayed up late last night finishing a book and therefore had to maximise my sleep time. Sometimes, the will is weak.
There was another reason for staying put this weekend. Remember that irritating, roller-skating, dog walking, hotpant wearing, numpty in the picture? An old advert, reassuring us women that we could feel free if we only used a tampax. Feck off lady. It would have been more realistic to show us crying over some shit TV programme, while mainlining a bar of Dairy Milk. It was good to know you could go swimming without re-enacting a scene from Jaws, but aside from that, exercise was never really on the agenda. Although boxing might have been fun for those darker, pre-menstrual grrrr days. Or maybe a spot of archery, using a man’s head for target practice. I had easy periods back then, lulled into a false sense of security after almost two decades on the pill.
When I finally stopped, to try and get pregnant, I realised what the real thing was like. Hells bells and buckets of blood, with added stomach cramps. Tampons do take the worst of the carnage away, but only to an extent. In Boots, I now look fondly at the regular ones ‘for lighter days’ with a one drip rating. These days, I need the extra super plus for the first couple of days: no explanation needed (for chunky days?), as these have a five drip rating out of a potential six. I have yet to see the six drip rated tampons; perhaps a pail with a sponge might be the best solution. Or a mooncup? These are little silicone cups that you re-use, therefore saving the environment from all these non-degradable products. Ideal for hippies, contortionists and women who don’t mind coming out of a cubicle in the ladies with hands that look like they’ve just performed heart surgery. I’d be worried about positioning and dislodging, ending up with a situation like this: 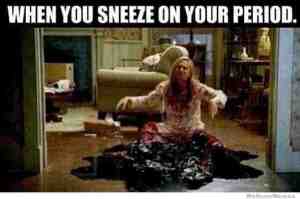 Of course, we are now advised not to use these plugs all the time. Tampons are not good for the fanjo, didn’t you know? They dry you out and can leave fibres behind. Eighteen months ago, I had some bad cells zapped from the cervix and the doc’s orders were clear: nought goes up there for six weeks, not a sausage. Bang goes our precious freedom.
Towels have advanced a lot these days. Remember the brick sized pads of yore?

They made you walk like John Wayne and were clearly visible in the horrible PE knickers we had in secondary school. But even now they still don’t do the job when you’re surfing the crimson waves. They cost a fortune as you may need to change them every time you pee and if you’re having a bad day, sometimes they leak, wings or no wings. I cried at one point last year, when I realised I had actually bled onto the sofa. Sometimes, just functioning like a normal person is tough; rollerblading or sky diving is simply out of the question.
Despite all this, I don’t usually use my blobs as an excuse to get out of exercise. Unless it’s so bad that I feel like I need a blood transfusion, I will still press play. Regular exercise makes us feel good overall, giving us better tools to deal with life when the shit (or the blood) hits the fan. Skipping is generally not too pleasant in these situations, but some exercises actually help and make me feel better. Anything fast, with high intensity and not too much stress on the core works for me, but gentle exercise and walking is good too. Anything involving punching, or smashing balls around can really alleviate stress the week before and is always preferable to killing an actual human being, especially your boss or your partner. Women are all different, and there are no hard and fast rules, except listen to your body. Sometimes your body just screams ‘CARBS AND SUGAR!’ and there’s nothing for it but ice cream and a bit of TLC.

The thing that bugs me the most about it, is that it’s still something of a big deal. Men take the piss out of us and our moods, fanny pads are still called ‘sanitary protection’ in the shops (protection against what? Our own blood?) and we are still mostly embarrassed to say that we don’t want to do that particular exercise today, or we are just out of sorts, because we are bleeding like a stuck pig and our bellies hurt. Even though more than half the world’s population are doing it regularly, for a good portion of their lives. Germaine Greer once wrote that a woman could not be truly liberated unless she had tasted her own menstrual blood (hey, it was the 70’s) and most women would still recoil in horror at the very thought. I have tasted mine – it might have been a bit of accident, but I’m claiming it as a feminist victory anyway – and you know what? It just tastes like ordinary blood.

It’s annoys me when the reality of my body gets in the way of my plans. But sometimes I just, quite literally, need to go with the flow. I can’t be a superhero every day…